EMO is the largest international tradeshow for the machine tool industry.

This year Milan will welcome the next edition of EMO 2021, taking place at fieramilano Rho from 4 to 9 October.

Metal forming and metal cutting machine tools, production systems, enabling technologies, solutions for interconnected and digital factories and additive manufacturing will be among the products and solutions spotlighted at EMO Milan 2021, which will transform fieramilano Rho into the biggest digital factory ever set up within an exhibition fairground. EMO Milan 2021 will be a meeting point for the most qualified operators of the industry, interested in planning new investments in production technology. 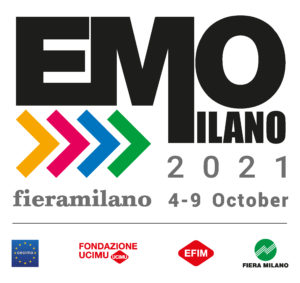 EMO is a registered trademark of the European Association of the Machine Tool Industries, CECIMO.

EMO presents an unparalleled range of products and services that cover all production areas relevant to machine tools and production systems – from machining and forming, as the nucleus of manufacturing, to precision tools, accessories and control technology, system elements and components for automated manufacturing, right on up to interconnecting equipment and industrial electronics.

The trade visitors to EMO come from all major industrial sectors, like machinery and plant manufacturing, the automotive industry and its component suppliers, aerospace, precision mechanics and optics, shipbuilding, tool and mould construction, medical technology, steel and lightweight construction.

of attendees originated from Europe

The first concern of CECIMO since its foundation in 1950 has been the organisation of a new type of exhibition complying with exacting rules. The aim of CECIMO has been to provide purchasers of machine tools, those working in the industry and connected with it as a complete view of the market place as possible. Thus the European exhibitions of machine tools were created as the only display in the world where only manufacturers of equipment may exhibit, and also where only the machines of one category are displayed in the same hall.

The first E.E.M.O. (Exposition européenne de machines-outils, or European machine tools exhibition) was held in 1951. From 1951 to 1971 the exhibitions space was trebled and the number of visitors continued to increase.

Although the exhibition was limited till the end of 1971 to manufacturers from the member companies of CECIMO, E.E.M.O. was already the largest exhibition for machine tools in the world. With the first EMO® in Paris (1975) the exhibition opened its door to non-European, CECIMO showed its desire for:

machine tool users with an opportunity to see and compare products from all over the world at a single exhibition;

a still greater concentration of production equipment for user equipment and assist contacts between manufacturers and buyers; so important because by stimulated by customers demands inform manufacturers of competitive products, thus promoting collaboration between them, for example, through licensed agreements;

the dialogue between science and industry;

successful investment policies in individual undertakings by presenting a comprehensive view of the state of the machine tool art at regular intervals.