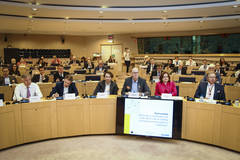 Brussels, 8 June 2017 - For the third consecutive year, CECIMO organized the “Additive Manufacturing European Conference” (AMEC) on 7 June 2017 in the European Parliament in Brussels (Belgium). The event was a great success, gathering more than a hundred participants among industry leaders and policy-makers. Speakers at AMEC used this occasion to bring attention on the need of a deeper EU approach.

AMEC III was organised by CECIMO and co-hosted by Brando Benifei (S&D), Anthea McIntyre (ECR) and Cora van Nieuwenhuizen (ALDE), Members of the European Parliament. The event highlighted Europe’s outstanding know-how in the development of industrial additive manufacturing and addressed the existing challenges for its adoption in Europe.

At a time of new competitors on the international stage, the conference pointed to the EU policy-makers’ role in advancing Europe’s position in the industry. Industrialists and decision-makers on stage converged on the provision of research funding, support to standardization efforts and creation of a large pool of talents for the industry as key issues for support from the EU policy community. As Filip Geerts, CECIMO Director General, said, “it is important to have a forward-looking approach, which will serve the EU in achieving its larger goals, like industrial policy, digitization but also e.g. circular economy”.

AMEC III elaborated also the CECIMO “European Additive Manufacturing Strategy”. The document provides an overview of the policy fields that deserve priority attention of EU authorities. It collects the inputs of several experts and details recommendations to speed up the AM uptake.

About CECIMO
is the European Association representing the common interests of the Machine Tool Industries globally and at EU level. We bring together 15 National Associations of machine tool builders, which represent approximately 1300 industrial enterprises in Europe (EU + EFTA + Turkey), over 80% of which are SMEs. CECIMO covers 98% of total Machine Tool production in Europe and about 36% worldwide. It accounts for almost 150,000 employees and a turnover of nearly €24 billion in 2016. Approximately 75% of CECIMO production is shipped abroad, whereas around half of it is exported outside Europe. CECIMO assumes a key role in determining the strategic direction of the European machine tool industry and promotes the development of the sector in the fields of economy, technology and science.
For more information visit www.cecimo.eu