CECIMO forecasts growth to continue in 2015 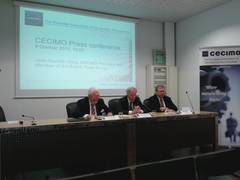 CECIMO, the European Association of the Machine Tool Industries presents the state of the European machine tool industry at EMO Milano 2015:

Together with the European economy, the European machine tool (MT) production also intensified in 2014:  it grew by1.3% to reach 23.0 billion euro. Since the European MT industry exports worldwide, it is affected by two opposing trends. First, a slowdown in emerging markets makes these reduce their investment in industrial machinery. Secondly, growth is relatively stable in developed markets like Europe and North America, which implies more investment in industrial machinery. Both trends considered, the European machine tool production is estimated to increase to 23.6 billion euro in 2015 (+3%).

Despite the slowdown of global economic growth, the European MTs’ exports still perform well. Machine tools with a total value of 18.2 billion euro were shipped abroad in 2014. CECIMO expects the exports to grow by 3% to 18.7 billion euro in 2015, which would be the second best result of all times. “Rising wages in the emerging economies put pressure on production costs. The European machine tool industry focuses on productivity and high efficiency that gives us our competitive edge. Our highly innovative, state-of-the-art machines are in demand all over the world because they offer intelligent and cost efficient manufacturing solutions. These are promoted on a large scale during EMO Milano 2015,” explained Dr Frank Brinken, the Chairman of CECIMO Economic Committee and a member of the Board of Directors of several machine tool companies.

CECIMO imports rose to 8.8 billion euro in 2014. The weak euro will slow imports’ growth down but we estimate that the European industry’s needs will push the MT imports to 9.2 billion euro this year (+3%).

After two years of stagnation, the European businesses’ investments picked up in 2014. The European MT consumption expanded by 10% in 2014 to 13.7 billion euro. The consumption is expected to go on increasing and record 14.2 billion euro in 2015. The improving demand in European markets is confirmed by the strong order intake. In the second quarter of 2015, the CECIMO domestic orders’ index increased by 6% and 14% in comparison with the previous quarter and the same quarter last year respectively. We expect the European MT consumption to grow for the next four years.

The industry in need for political action at EU level

The European MT sector goes towards the adoption of disruptive manufacturing technologies like intelligent production and additive manufacturing. It wants to participate in public-private partnerships and focuses on cross-disciplinary cooperation. The sector is accelerating the integration of new technologies like big data and industrial internet into its equipment and services, laying the foundations of the future’s intelligent and connected factories. They are also heavily involved in helping our manufacturing workforce to adapt to new technologies and the new business environment.

It is clear that innovation is and will be the motor of growth for the MT industry, and the lack of investment in manufacturing is its most important obstacle. Filip Geerts, director-general of CECIMO says: “The EU decision makers must use the European Fund for Strategic Investments to finance support programmes helping to accelerate “technology transfer” whilst tackling the underinvestment problem.”

CECIMO is the European Association of the Machine Tool Industries. We bring together 15 national Associations of Machine Tool Builders, which represent approximately 1500 industrial enterprises in Europe*, over 80% of which are SMEs. CECIMO covers 98% of total Machine Tool production in Europe and about 39% worldwide. It accounts for over 150,000 employees and a turnover of €23 billion euro in 2014. More than three quarters of CECIMO production is shipped abroad, whereas half of it is exported outside Europe*. For more information, visit www.cecimo.eu *Europe = EU + EFTA + Turkey