CECIMO organized, along with partners, a roundtable meeting at the European Parliament 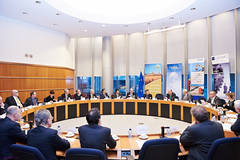 Brussels, 20 March 2013 – In the framework of the European Forum for Manufacturing CECIMO organized at the European Parliament, along with its partners CECE, CEMA, FEM and EUROMAP, the roundtable Market surveillance Package and Product Safety – Preserving a Competitive Machinery Industry in Europe.

Luigi Galdabini, President of UCIMU-SISTEMI PER PRODURRE speaking on behalf of CECIMO, affirmed that there is a need to ensure the uniformity of market surveillance practices across the EU: “The Commission should play a greater role in coordinating the market surveillance programmes of Member States. If market surveillance remains weak in any part of the EU, these soft spots will void efforts undertaken in other countries and will create unfair trading conditions.”

Jarmo Hyvönen, CECIMO Vice-President, stressing the importance of establishing a Union framework for proportionate and deterrent sanctions, stated: “A certain level of approximation between sanctions in Member States should ensure that those who play unfairly are exposed to a similar level of risk on every spot of the Union’s territories.”