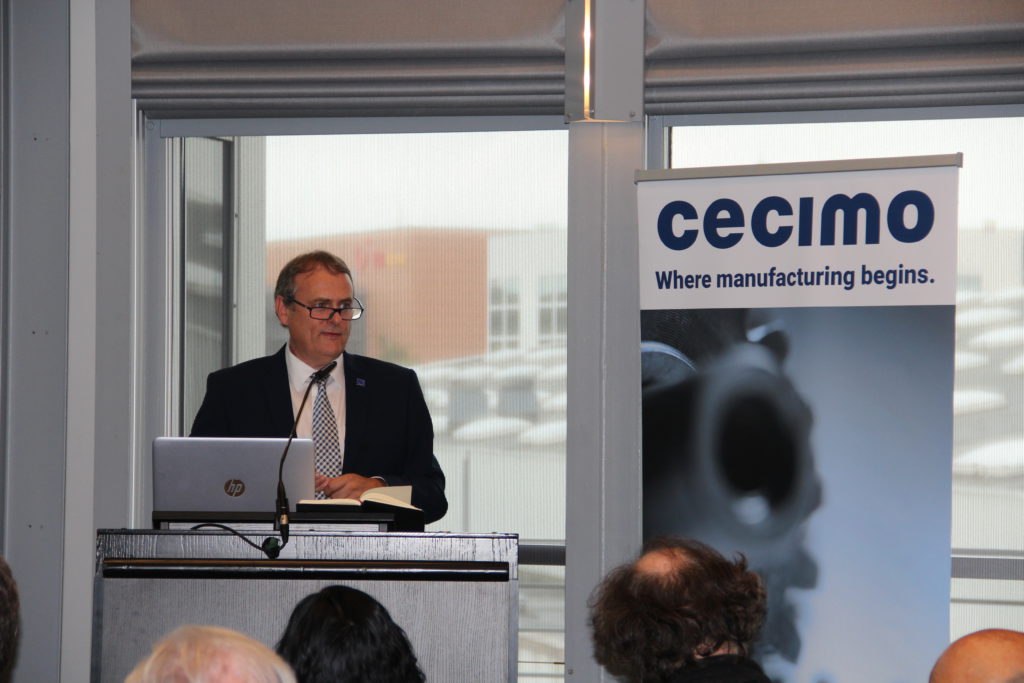 Hannover, 16 September 2019 - With uncertainty being the only clear rule nowadays, the outlook for global markets might deter almost the most adventurous of manufacturers and exporters. However, a more balanced analysis of our economic environment shows us that, despite the looming geopolitical troubles, there are many foreign opportunities for the machine tool industry to thrive.

Dr. Roland Feichtl, President of CECIMO, stated in his opening words that “the MT market appears to be slowing down, due in part to the increasing difficulties in the international political scene”. Total orders for Q2 2019 have gone down 19% with respect to Q1 and around 24% if compared to the figures of Q2 2018. Moreover, industrial production in Europe seem to be facing a downward trend, while European manufacturers trust in the market is also decreasing. Economic factors are indeed behind this apparent change of cycle, but geopolitical issues also hold sway over this. One of these is well known, as it has been at the centre of the European political debate since June 2016: Brexit. Since 2018, British machine tool builders have been CECIMO’s seventh largest producer, contributing more than 500 million euros in goods (a share of 2,3%), as well as the seventh largest consumer, with 4,2% of overall CECIMO consumption (around 730 million euros). They are also CECIMO’s ninth largest exporter, providing more than 560 million euros to the total sales abroad. These numbers show that the UK is an economic cornerstone of our project. If bureaucracy and potential tariffs were introduced between European and British MT industries, the impact in the sector would be negative.

Whatever the outcome, the UK will remain a strong strategic member within CECIMO, and it will support the association’s efforts to ensure that trade will continue as smoothly as possible. Recent efforts by the European Union to guarantee free movement of industrial products between the Single Market and the United Kingdom, such as the regulation Union General Export Authorisation for the export of certain dual-use items from the Union to the United Kingdom, are pointing in the right direction, but, should the United Kingdom ultimately leave the European Union, a more stable solution would be a wide-ranging exit agreement.
The world economy faces another challenge: the United States-China trade war. Aggressive tariff policies have tainted the trade relations between these two countries. These tariffs have mainly harmed Chinese and American goods, but also affected CECIMO foreign customers. In 2018, CECIMO national producers held significant trade surpluses with China (a positive balance of 2.7 billion euros) and the US (1.7 billion euros). Considering these are two of the largest markets in the world, this trade war could possibly diminish CECIMO’s competitive edge.

Another relevant scenario is the Russia-Ukraine conflict. In 2014, Russia was sanctioned by the US and the EU over its political interference in the neighbouring Ukraine. These measures, however, have not settled the dispute and have hampered European businesses, especially companies that trade in the Russian industrial markets. Russia is currently CECIMO’s fifth largest export market, with a 4,6% share over total exports. In 2008, CECIMO exports to Russia amounted to 10,3%, yet the instruments employed to sanction the country have in part cut the share to the level we see today.

The current Iran conflict also poses difficulties for a number of MT builders. Machine tool exports to Iran have plummeted since 2010, when they reached their peak (157,3 million euros), to a mere 4,2 million euros in 2018. The restriction on trade of dual-use goods has limited CECIMO’s business potential in the Iranian market, and it will surely continue holding back Iran’s transition to a manufacturing-based economy.
In this context, CECIMO is willing to cooperate to ensure transparent trade relations with these and other countries, and it urges the European Union to use effective instruments that do not seriously hinder European MT builders’ position abroad. Dealing with these challenges will not be an easy task, but CECIMO will support all efforts to overcome them.

In spite of the above, we recently saw political developments at the international level that might represent a business opportunity for our sector. The Juncker Commission paved the way for the signing of new trade agreements with MERCOSUR -a regional trade bloc that currently comprises Brazil, Argentina, Uruguay and Paraguay- and with some strategic, export-oriented countries, such as Mexico and Vietnam.

Regarding MECOSUR, on the 28 June 2019 the EU and South American trade bloc representatives reached a political agreement to sign a new bi-regional trade deal. One of its main features is the removal of certain high customs duties, which will particularly benefit key industrial sectors, such as cars (35%), car parts (14%-18%) and machinery (14%-20%). In 2018, EU exports in goods to Mercosur were worth 45 billion euros and imports, around 43 billion euros. We can only expect trade flows to increase notably if the agreement is finally signed and duly implemented.

Mexico is CECIMO’s fourth largest export market in terms of value, covering around 4,5% of the total exports share in 2018. In terms of total value, CECIMO exports to the Mexican market grew considerably: from more than 275 million euros in 2009 to more than 592 million euros in 2018. Mexico is a full member of NAFTA, and, given the agreement reached in principle between the EU and Mexico in April 2018, CECIMO could benefit from general North American trade relations and gain access to the American market.

As for Vietnam, the trade and investment agreement signed in June 2019 will allow European manufacturers to access the EU’s 16th trade partner in goods and the EU's second largest trading partner in the Association of Southeast Asian Nations (ASEAN). The potential of this market is clear: while in 2007, machine tool exports to Vietnam were worth just 13 million euros, in 2018 they reached 139,4 million euros.

The path indicated by the Juncker Commission should continue in the next legislature. Indeed, Mr. Marcus Burton, Chairman of CECIMO’s Economic Committee, concluded that “CECIMO supports the political guidelines of the Von der Leyen Commission, as they pursue comprehensive trade strategies for the neighbouring regions of the EU, a new EU-US trade partnership, and, above all, a reform of the WTO trade protection mechanisms and rules”.

Beyond trade, our members are demonstrating how the manufacturing businesses continuously improve their productivity by investing in advanced digital systems and highly innovative technologies, even when economic perspectives seem unclear. CECIMO urges the European Union to support the 4.0 industry with clear and concise policies and by counteracting technophobic discourses. Investing in new technologies is key to future success, even in a difficult economic period, and this edition of EMO Hannover 2019 shows it more than ever.

About CECIMO
CECIMO is the European Association of the Machine Tool Industries and related Manufacturing Technologies. We bring together 15 national associations of machine tool builders, which represent approximately 1500 industrial enterprises in Europe (EU + EFTA + Turkey), over 80% of which are SMEs. CECIMO covers 98% of the total machine tool production in Europe and about 35% worldwide. It accounts for more than 150,000 employees and a turnover of nearly €27.5 billion in 2018. More than three quarters of CECIMO production is shipped abroad, whereas half of it is exported outside Europe.