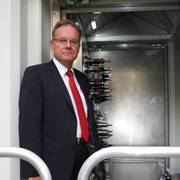 Brussel, 22 November 2017 – During its meeting held on 22 November 2017 in Brussels, the CECIMO General Assembly elected Dr Roland Feichtl as President of CECIMO for a period of two years.
Succeeding in this role Mr Luigi Galdabini, Managing Director at CESARE GALDABINI S.p.A., Dr Feichtl has been entrusted with the responsibility of leading the European Association that represents more than a third of the world machine tool (MT) production.
During his Presidency, Mr Galdabini strongly addressed the issue of the investment gap. According to Mr Galdabini, corporate investments in Europe do not compensate for the depreciation rates. The obsolescence of the machinery park risks dragging European industry into a downward spiral of low productivity- low value added- low profitability.
CECIMO President Dr Feichtl affirmed that, in line with the previous presidencies, he “will continue to promote the strategic importance of our industry towards European authorities and citizens. I will make sure that manufacturing and the re-industrialisation remain on top of the EU policy priorities”.
He underlined how in such a complex environment, businesses are faced with common grand challenges such as globalisation, climate change, resource efficiency, regulatory pressures, and the increasing weight of emerging economies. “A few decades ago, maybe it was possible for companies and countries or regions to solve all their problems on their own” he added. “This is not the case anymore. Machines, factories, companies and, yes, also countries are linked more than ever”. CECIMO should help its members to tackle their challenges together.
During his presidency, he will follow closely the initiatives of the European Commission in the field of the Digital Single Market, which aims at achieving considerable benefits for the digital economy. Under his mandate, CECIMO will “develop industry information and expertise in new emerging areas of importance, e.g. Digitisation, Digital Platforms, industrial security and trust, as well as monitor new customer technologies, that change the workpieces to be machined like new drivetrain. CECIMO will look for the support of European authorities to sustain the efforts of its member companies in providing machine tool solutions that improve the energy-efficiency of combustion engines. Through this and similar actions, our industry contributes straightforwardly to the challenge of CO2 reduction for our society. “But we should compare the complete sytem of different solutions e.g. from production over use, till disposal of a car to help environment.” In a market driven economy, Authorities should only set targets, but not select a special technology as the right one to solve complicated technical issues.
Dr Feichtl will “use the success of the Italian campaign for tax and other incentives to promote the modernization of the machine tool infrastructure in the other CECIMO countries” and will push forward the discussion on circular economy within our Association and with industry stakeholders in order to achieve our sustainability objectives.
Beside this as President of CECIMO, he will continue to “explain to European authorities and citizens the strategic role our industry plays in boosting jobs, growth and investment across Europe, as well as the necessity to improve the business environment, in order to ensure the development of Europe’s manufacturing base within its borders, maintain its competitiveness and ensure a level playing field for our industry”.
Who is Dr Roland Feichtl?
Born on 26.03.1957, Dr Roland Feichtl finished the Technical College HTL in Linz (Austria), with the degree of Engineer and started his career in 1976 within VOEST-ALPINE Group. After the successful automation of their machine-tool programme e.g. the Millturn of today’s WFL Linz, he became Vice-President, “Prokurist” as well as Head of the Business Unit “Assembly and Transport Systems”, today TMS Linz, with products like Welding lines for car bodies, Assembly  lines for powertrain, Automated guided vehicles AGVs and Monorails.
From 1978 on, he studied – besides the job - at the Johannes-Kepler-University in Linz. Graduated in 1982 with the Master degree “Diplom-Ingenieur”, he finished his studies also at the Institute for Production Technology at the Technical University of Vienna, with a Doctor degree in Technical Science.
Since 1993, Dr Feichtl is responsible for machine-tools and automation within the MTB-Group (1.000 m revenue and 5500 employees), and Group CEO of several traditional machine-tool companies like, for example, 200 years’ Mauser-Werke Oberndorf (Germany) or fineboring specialist Krauseco in Vienna (Austria) which has more than 100 years of experience. Here, Dr Feichtl developed Krause+Mauser Group to become the world market leader for connecting-rod-machines and laser-cracking-technology and a premium supplier of the international automotive industry.
Dr Feichtl is, among other things, co-owner and Chairman of the Supervisory Board of the company Feiba in Traun (Austria), specialised in Automation and Robot-Application.
Since 2000, Dr Feichtl is delegate of the National Association FMTI. For many years he was Chairman of Vienna’s Industry and is the current Chairman of the Professional Body for Austrian Machine-Tools.
Dr Feichtl joined CECIMO in 1999 as a Delegate, was Chairman of Technical Committee, CECIMO Vice-President and Board Member for the last 17 years.
About CECIMO – European Association of the Machine Tool Industries
CECIMO is the European Association representing the common interests of the Machine Tool Industries globally and at EU level. We bring together 15 National Associations of machine tool builders, which serve approximately 1300 industrial enterprises in Europe (EU + EFTA + Turkey), over 80% of which are SMEs. CECIMO covers 98% of total Machine Tool production in Europe and about 36% worldwide. It accounts for almost 150,000 employees and a turnover of more than €24 billion in 2016. Approximately 75% of CECIMO production is shipped abroad, whereas around half of it is exported outside Europe. CECIMO assumes a key role in determining the strategic direction of the European machine tool industry and promotes the development of the sector in the fields of economy, technology and science.
For media enquiries, contact:
Filip Geerts, CECIMO Director General
Tel +32 2 502 70 90
filip.geerts@cecimo.eu
Back to news
Cookies To make this site work properly, we sometimes place small data files called cookies on your device. Most big websites do this too. Read more
Accept
Change Settings
Cookie Box Settings
Cookie Box Settings