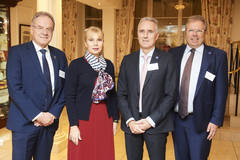 Brussels, 21 November 2017 – CECIMO had the pleasure to host Ms Elzbieta Bienkowska, Commissioner for the Internal Market, Industry, Entrepreneurship and SMEs, during its meetings in Brussels. In her address to industrialists and stakeholders on the role of artificial intelligence and machine learning, she encouraged companies and firms to get involved in the European Industrial Strategy.

Ms Elzbieta Bienkowska was the keynote speaker of the CECIMO meetings on artificial intelligence and machine learning on 21 November 2017, in front of a selected audience of industrialists, MEPs, EU officials and stakeholders. The event was timely organised ahead of the Commission proposal on artificial intelligence and the Commissioner emphasized the important role of the European Commission in recognizing the potential economic and societal benefits of such technology. “By putting a favourable and stable business environment in place”, she said, “Europe can compete globally on both the development and uptake of AI solutions”. It’s important that Europe is ready to act upon the new challenges as they will affect different areas of our lives, from work to privacy, from governance to public research. In this context, the European Commission needs to mitigate the risks and prepare citizens to a smooth transition. Ms Bienkowska went on by saying that “we need to avoid unnecessary anxiety based on far-fetched AI take-over scenarios that could distort public perception of AI”.

Artificial intelligence has a primary role in the Digital Single Market Strategy and the European Industrial one, where it will be important to converge physical and digital technologies on the industrial value chain. Among the many actions illustrated during the speech, the machine tool industry is particularly touched by the current EC evaluation of the machinery directive. The Commissioner confirmed that one of the areas they are looking at is whether the directive is adapted to respond to the changes brought by new digital technologies.

CECIMO is pleased that, in her outline of the EU Industrial Strategy, Elzbieta Bienkowska mentioned the relevance of the industry and companies, inviting businesses of all sizes to be fully involved, as the process will be launched next year during the second EU Industry Day on 22 and 23 February 2018. Filip Geerts, CECIMO Director General, pointed out that “CECIMO can greatly contribute to the ongoing and future work of the European Commission in the Industrial Strategy and we are ready to get involved in any actions and initiatives taken by the European Commission”.

About CECIMO – European Association of the Machine Tool Industries
CECIMO is the European Association representing the common interests of the Machine Tool Industries globally and at EU level. We bring together 15 National Associations of machine tool builders, which serve approximately 1300 industrial enterprises in Europe (EU + EFTA + Turkey), over 80% of which are SMEs. CECIMO covers 98% of total Machine Tool production in Europe and about 36% worldwide. It accounts for almost 150,000 employees and a turnover of more than €24 billion in 2016. Approximately 75% of CECIMO production is shipped abroad, whereas around half of it is exported outside Europe. CECIMO assumes a key role in determining the strategic direction of the European machine tool industry and promotes the development of the sector in the fields of economy, technology and science.