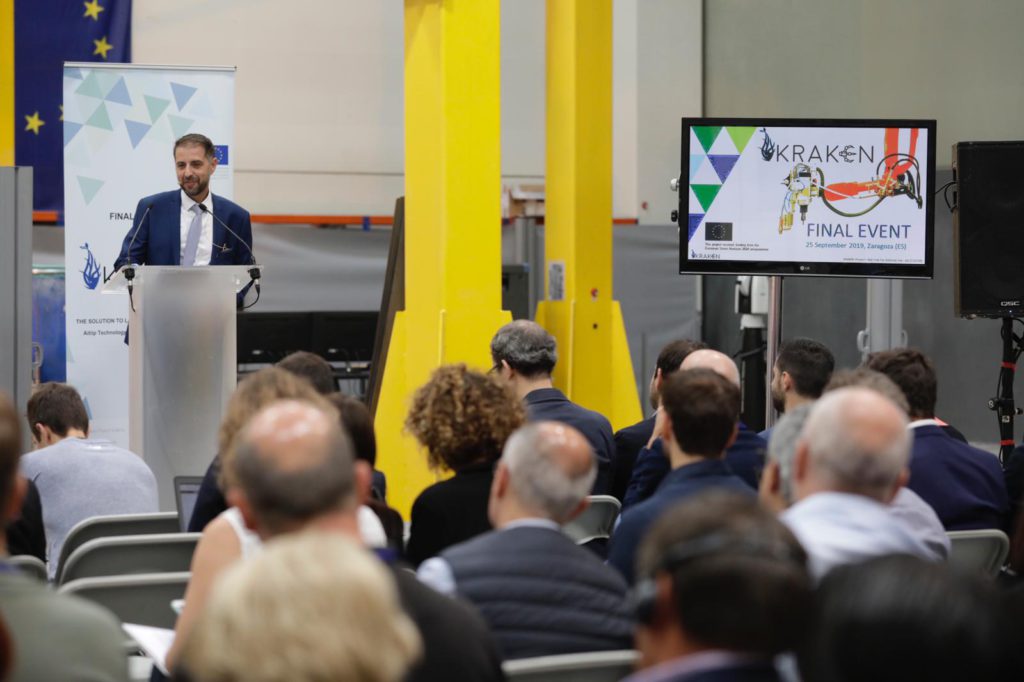 Yesterday, Wednesday 25 September the KRAKEN system has been presented at the AITTIP Technology Center, located in Zaragoza (Spain) in the frame of project final conference to 120 attendees from Spain, UK, Germany, Italy, Greece and USA.

The KRAKEN is a research result from H2020 EU program capable of producing parts through Additive Manufacturing alternating material deposition with subtractive operations (layer-by-layer) within a maximum working area of 20m x 8m x 6m. José Antonio Dieste, Aitiip researcher and project coordinator stated that “the machine is ready for the market, it has been tested in real manufacturing environment and project demonstrators have been validated by the companies in real conditions. We can deliver now pieces or install Kraken cells according to client demands.”

Project partners presented project results to the audience and expressed their aim to revolutionize the manufacture of large parts, both metallic or hybrid, thanks to the quality and size of final parts, which together with the efficiency of the process and the speed of production, makes it an all-in-one manufacturing system unique in the world.

Besides system calibration, frame alignments and realtime correction, quality inspection of semi-finished or final parts is a very important step and an additional advantage of the embedded metrology system. In this sense Markus Steiner (Hexagon Manufacturing Intelligence) enlightened “Due to the integrated Leica Absolute Tracker, parts manufactured by the KRAKEN machine can be digitized in 3D and checked against the CAD design to verify the quality of manufacturing over the full volume of the machine, even fully automated if needed.“

“Guaranteeing accuracy in large workspaces (100m2 ) is a challenge that Kraken has solved by integrating real time laser tracking technologies within the closed loop control of the robotic system. Thanks to this method, tool precision can be assured down to 0,1mm.” Francesco Crivelli, CSEM SA was responsible for designing the control algorithms and implementing the software.

Industrial companies also showed their interest in additive manufacturing results. AIRBUS, the aircraft manufacturer, confirmed that hybrid technologies is not the future but the present and since now the company is going to demand tools and tooling manufactured with this technology no matter where or who produce it.

In fact additive manufacturing opens the possibility to produce large parts of composite materials (carbon, glass...) for applications in sectors such as aeronautics, railways, maritime and large off-shore and wind infrastructure. This technology allow the incorporation of new thermal optimization and energy saving concepts by combining different materials and geometries in a single product.

Not only aircraft industry is interested, also automotive industry demonstrated their interest. Vito Guido (GroupMaterials Labs, CR Fiat) confirmed that this technology will be used for sure for mock-up productions, it has demonstrated that for short productions the technology offer quality results on time.

Indeed, thanks to the KRAKEN machine it is now be possible to produce very large prototypes, such as designs for architecture and the creative and cultural industries, concepts for the transport sector, as well as large scale models for wind tunnels in the case of the aerospace industry.

Manufacturing method
The Additive Manufacturing system, provides metallic material using WAAM at a deposition rate of 1.5l / h. The KRAKEN machine also includes a bi-material resin extrusion system which can reach deposition rates of 120 kg/h. The metallisation process can reach deposition rates of 6kg/h.
In addition, the subtractive capabilities of the machine allow for cutting, sanding, polishing operations ... reaching 2mm of cutting at 10m / minute.
All these operations are controlled by a laser tracker, which monitors and controls the position of the head 1000 times per second, correcting its position automatically. The system also incorporates two types of cameras and artificial vision systems to control the deposition flows and for the subsequent verification of the piece, through three-dimensional scanning.

The first finalised demonstrators were shown for the first time
The possibility of building large metal and resin parts by means of high-quality 3D printing has raised the interest of a wide part of the industry. Some demonstrators of the project are already finished. These demonstrators aimed at validating the functionality of the system and they will be presented for the first time at the facilities of AITTIP Technology Center in Zaragoza (Spain).

Hybrid lining panels for road tunnels of 3 · 1.2m have been manufactured for Acciona, one of the consortium partners. Thanks to the combination of resin and metal, electrical connections can be made much easier.

Regarding the automotive sector, a mock-up car of one of the latest Pininfarina car models has been produced to validate its design. The built piece has a size of 2.2x1x0.6m and a weight of 250kg.

These are some of the real applications that have already been tested, although the sectors that can benefit from this system are much broader, since it offers low cost, high quality, fast and efficient alternatives for the die and mould sector and to the tooling of large parts .

The project
This manufacturing system is the result of a European Project coordinated by AITIIP in which 15 partners have collaborated for the last three years.