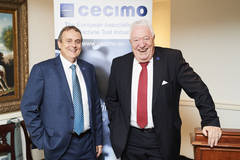 Brussels, 22 February 2018 – During the last CECIMO meeting, the CECIMO General Assembly elected Marcus Burton as Chairman of the Market Intelligence Committee for a period of two years.

As the successor of Frank Brinken, Vice-Chairman of Starrag Holding AG, Mr Burton will guide the Market Intelligence Committee of the European Association that represents more than a third of the world machine tool (MT) production.

He will lead the CECIMO Economic Department, which provides up to date information to the member associations regarding the evolution of the global market of machine tools, and aggregates the national data, in order to assess the global weight of CECIMO machine tool builders, whether in terms of production, exports, imports or consumption. He will also coordinate the collaboration with the associations of machine tools builders in other major countries outside Europe (Japan, USA, South Korea, Taiwan, and more recently Brazil) in creating global statistics on orders and shipments.
Mr Burton will guide the team to discuss the latest trends in the market, define new methodologies and tools to constantly improve the quality of the market intelligence, but he will also give inputs on challenging debates for the machine tool industry, such as dual use, automation of work and the economic consequences of Brexit. To him, “European manufacturing is leading the world in industrial digitisation and new technologies. To preserve the competitiveness of our machine tool industry, we need to ensure a fair and open trade, a market attractive for foreign investment and high-tech innovation”.

Who is Marcus Burton?

After gaining a first class honours degree in Production Engineering, a Master degree in Machine Tool Technology and an MBA Executive Programme from the University of Birmingham, Mr Burton entered the metrology industry, including 15 years with Brown and Sharpe (USA) as a General Manager and Director of a number of European subsidiary companies.

Mr Burton has extensive board level experience in Business Development and Strategy including international acquisitions and post merger integration and has also worked as an independent consultant in strategic management.

In April 2017 Mr Burton took on the new role of non-executive Director of Yamazaki Mazak UK Ltd, with specific interest in future business strategy and external relations which has taken on more significance since the decision for the UK to leave the European Union.
Mr Burton is also a board member of the Manufacturing Technologies Association (MTA).

Picture: from left to right Marcus Burton and Frank Brinken.

About CECIMO – European Association of the Machine Tool Industries
CECIMO is the European Association representing the common interests of the Machine Tool Industries globally and at EU level. We bring together 15 National Associations of machine tool builders, which serve approximately 1300 industrial enterprises in Europe (EU + EFTA + Turkey), over 80% of which are SMEs. CECIMO covers 98% of total Machine Tool production in Europe and about 36% worldwide. It accounts for almost 150,000 employees and a turnover of more than €24 billion in 2016. Approximately 75% of CECIMO production is shipped abroad, whereas around half of it is exported outside Europe. CECIMO assumes a key role in determining the strategic direction of the European machine tool industry and promotes the development of the sector in the fields of economy, technology and science.