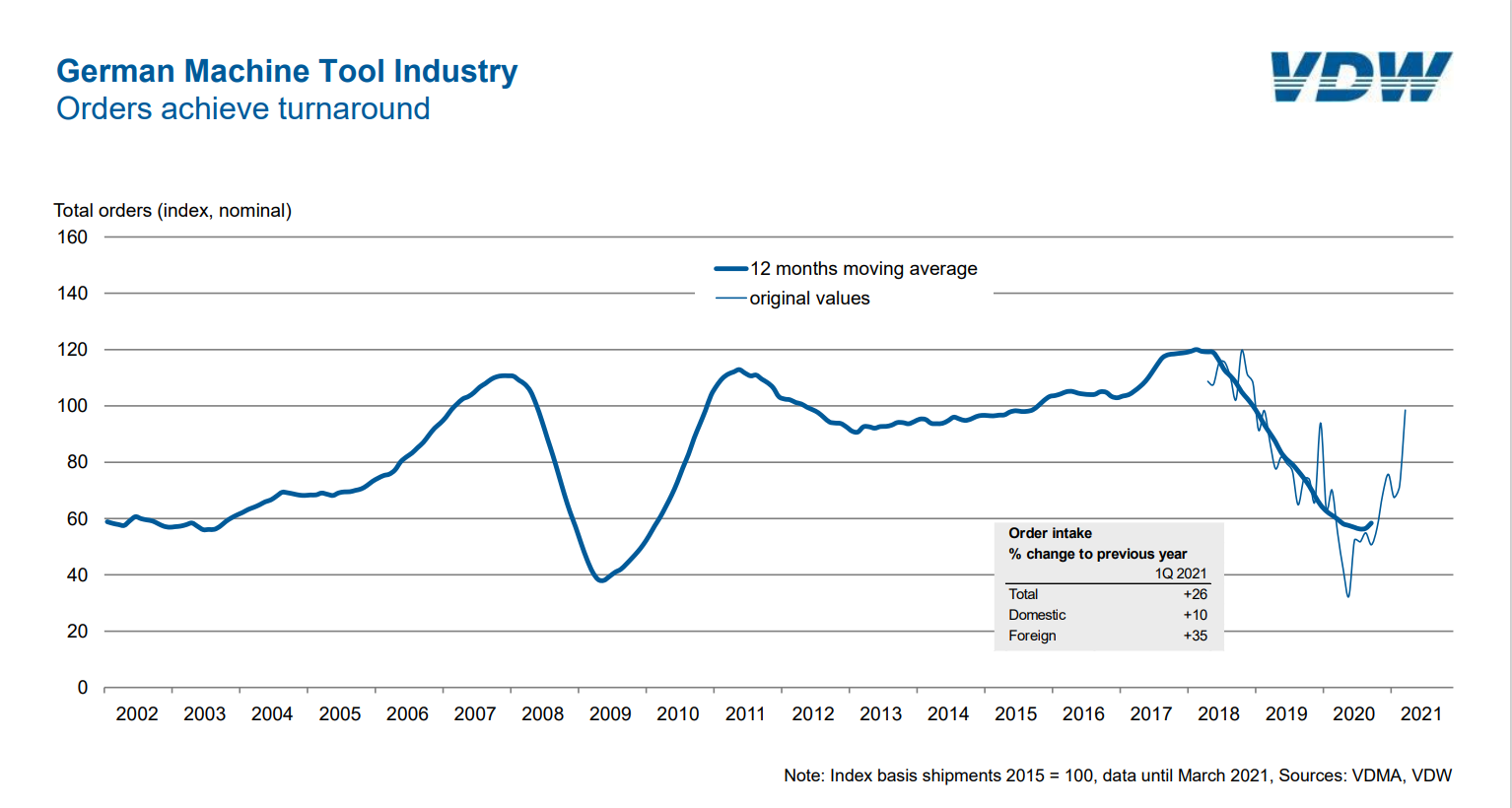 Orders received by the German machine tool industry in the first quarter of 2021 were 26 per cent up on the same period last year. Orders from Germany rose by 10 per cent. Foreign orders, however, were 35 per cent higher than in the previous year.

"For several months now, the industry has been registering improving sentiment among customers. This is now finally being reflected in the figures," says Dr. Wilfried Schäfer, Executive Director of the VDW (German Machine Tool Builders' Association) in Frankfurt am Main, commenting on the result. However, the low basis of the figures in the first quarter of 2020 was also part of the reason for the strong growth, as demand fell away sharply from March 2020 as a result of the pandemic. Comparison with the first quarter of 2019 therefore provides a more realistic picture. Here, total orders are still 14 per cent below the level at that time, while foreign orders are just 1 per cent higher. "That means we still have a long way to go before we return to a reasonable level," Schäfer sums up.

The upward trend in foreign orders in the current year is primarily attributable to the non-euro economies. Here, China is driving the global economy forward and fuelling demand. It has been joined in this role by the new beacon of hope, the U.S. However, the recovery is relatively broad-based, as Europe is now also reviving. Many areas have a lot of catching up to do. The positive picture is completed by the capacity utilisation figure, which has risen from a low of 67 per cent last summer to its current rate of 79 per cent.

Employment represents a delayed indicator of economic development, and is falling at present. In February, the sector employed around 7 per cent fewer people overall than in the previous year. This translated into 66,800 men and women. "This is a very moderate figure compared to the decline in production and orders. It shows how important it is for companies to retain their well qualified staff. Short-time working was a great help here," says Wilfried Schäfer.

Nevertheless, companies are struggling elsewhere. Bottlenecks in supplies are hampering production. In a recent pandemic survey, almost half of the machine tool manufacturers surveyed said they were experiencing serious problems with the supply of electronic components, especially controls. 46 per cent were experiencing difficulties with steel and metal products. "Companies are already voicing fears of not being able to process orders on time because of the severe disruptions in the supply chain," Schäfer reports

The VDW expects production levels to increase by 6 per cent in the current year. The resulting volume of 12.9 billion euros is above that of the 2009/2010 financial crisis, but still far below the record years 2018 and 2019.

The German machine tool industry ranks among the five largest specialist groupings in the mechanical engineering sector. It provides production technology for metalworking applications in all branches of industry, and makes a crucial contribution towards innovation and enhanced productivity in the industrial sector as a whole. Due to its absolutely key role for industrial production, its development is an important indicator for the economic dynamism of the industrial sector as such. In 2020, with an average of 70,000 employees (firms with more than 50 staff), the sector produced machines and services worth around 12.2 billion euros.

Back to news
M