The European machine tool production expected to grow 3% in 2015 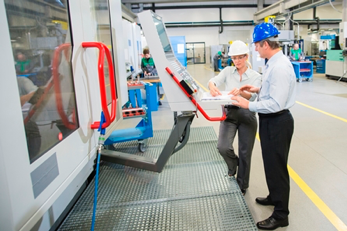 During the General Assembly that took place in Bordeaux on 6 July 2015, CECIMO’s Economic Committee confirmed:

The CECIMO countries exported machine tools in 2014 for a value of 18.2 billion euro, which is marginally less than in 2013. This can be explained by the slowdown of economic growth in the emerging markets. On the other hand, the changes of consumption pattern in those counties and the improving growth outlook in developed markets forecast a growth in our exports this year.

The increasing business confidence supports an investment recovery in the main machine tool consumer sectors. The European machine tool consumption grew 7% to 13.5 billion euro in 2014. Taking into account the positive trend in industrial capacity utilisation, European manufactures will look for possibilities to expand their production lines. Therefore we forecast that the machine tool demand will continue to grow in 2015.

“On one hand, we see growth slowing down in emerging markets, the risks relating to possible Greek exit from the euro zone and the effects of EU sanctions on CECIMO export sales to Russia. On the other hand, we see a solid demand in advanced countries. The weak euro will certainly have a positive effect on machine tools exports. Therefore, our expectations for 2015 are still on the positive side,” explained Dr Frank Brinken, the Chairman of CECIMO Economic Committee and a member of the Board of Directors, Starrag Holding Group.

New industrial trends and technologies transform the manufacturing industry, and they change the rules of global competition. The digitalisation of manufacturing and the penetration of disruptive technologies into the industrial base lead to significant productivity and efficiency gains. Breakthrough production techniques, such as additive manufacturing, stretch the limits of product design and innovation whilst providing solutions to societal challenges. Moreover, the mass-customisation trend opens the way to

the re-industrialisation of Europe. Against this background, Europe has to move faster than competitors to tap into opportunities in advanced manufacturing. “An ambitious European Industrial Policy should promote smart and coordinated investments, especially in the areas of research and development, education and training, SME finance, infrastructure and standardisation,” added Mr Jean Camille Uring, the President of CECIMO and Executive Board Member of Fives Group. CECIMO urges the EU policymakers to shape supportive framework conditions for the digitalisation of industry and for the development of additive manufacturing technologies to increase the competitiveness of the European industry as a whole.

The European Commission and the the United States’ government have expressed their strong commitment to intensify the trade talks and aim for an ambitious and comprehensive agreement. CECIMO welcomes the positon of the European Commission to target technical requirements, standards and conformity assessment in the chapter specific to engineering of the TTIP.  Moreover the foreseen stakeholder consultation procedures on regulatory issues will be instrumental to avoid the emergence of new barriers to trade. “The European machine tool industry is dominated by SMEs who lack resources to cope with excessive red tape in regulatory or custom procedures. The TTIP will be beneficiary for innovative SMEs who will be able to tap into market opportunities in the US, especially in the view of the ongoing re-shoring trend,” highlighted Filip Geerts, the Director General of CECIMO. While recognising the significant progress made during the trade talks, CECIMO continues to stress the importance of addressing non-tariff barriers, technical requirements and regulatory cooperation in the final agreement.