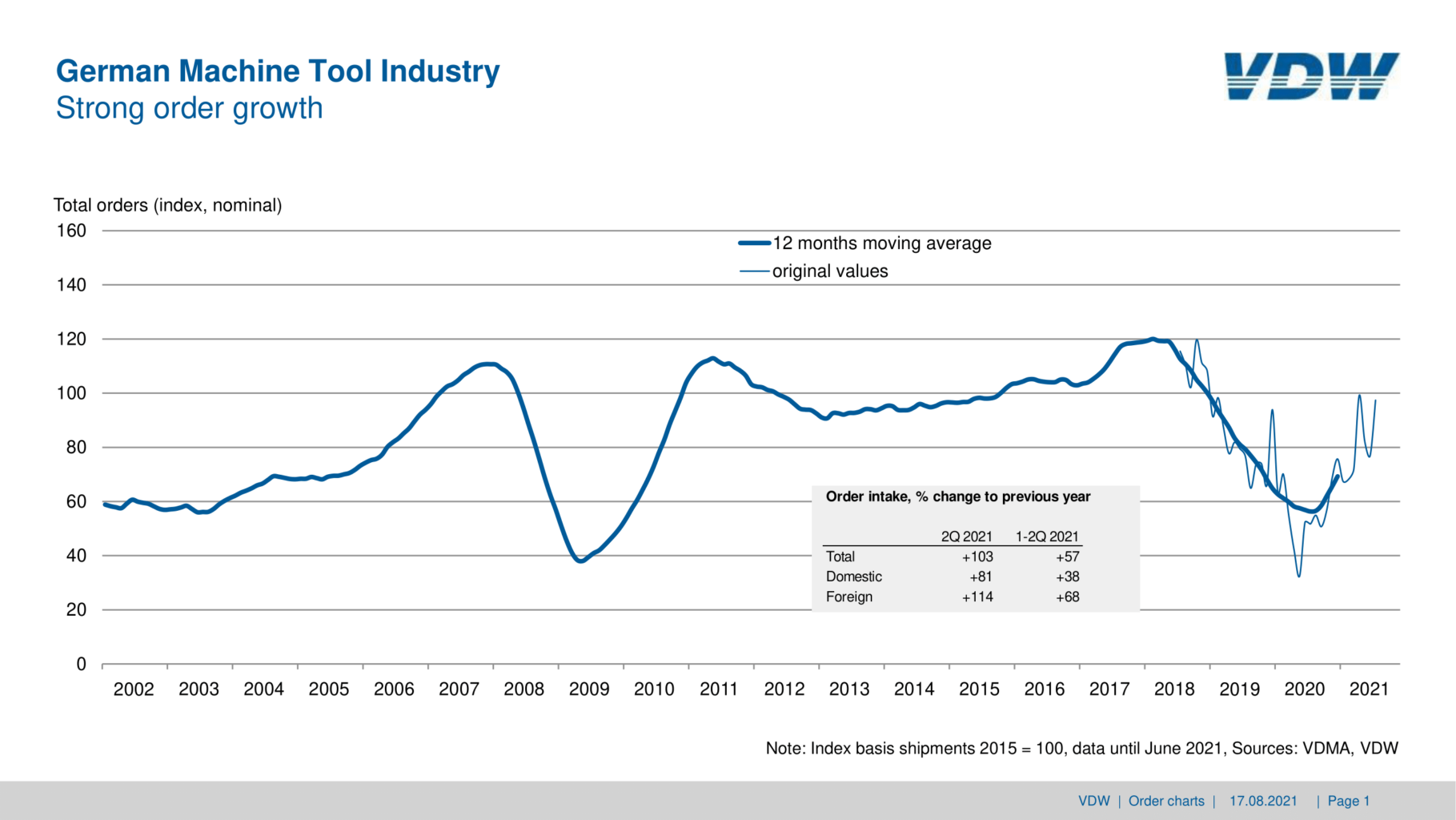 "The industry has turned itself around with considerably more dynamism than was originally assumed and, despite some delivery difficulties, is posting strong increases in order levels," says Dr Wilfried Schäfer, Executive Director of the VDW (German Machine Tool Builders' Association), Frankfurt am Main, commenting on the result.

The very high growth rates were explained in part by the weak reference values from 2020 as a result of Covid. However, the order volumes have recovered noticeably and, at 4 per cent, are now only slightly below the pre-Covid levels seen in 2019. The development is also broad-based, which bears witness to the great pent-up demand among investors from all over the world

The main demand is still coming from abroad at present. The Asian market continues to be dominated by high demand from China, which accounts for two-thirds of Asian order volumes. Business with the US is starting to recover. There are increasing signs that US orders are about to pick up more strongly. Europe has also revived noticeably. Here, it is above all fiscal policy measures, including investment programmes, which are boosting demand. Austria and Italy are prime examples. The German market is set to follow suit, albeit with a delay. Overall, however, the peak levels of 2017/2018 are not expected to be matched until next quarter.

"The picture would be even rosier without the bottlenecks and price increases in supplies of electronics, steel and sheet metal etc.," says Schäfer summing up. However, further increases in demand are expected – assuming that the global economy continues its recovery. This is already being reflected in production levels in the current year. The significant increase in orders has led Oxford Economics, the VDW's forecasting partner, to put production growth at 8 per cent, two points higher than in the spring. This would bring the volume for the current year to EUR 13.2 billion. "Nevertheless, there is still some way to go before we reach the peak result of 2018/2019," says Schäfer. At that time, the industry achieved a result of EUR 17 billion.

Employment represents a delayed indicator of economic development, and is still falling at present. In June, the sector employed almost 8 per cent fewer people than in the previous year. This represented around 64,200 men and women. Most furlough schemes had finished. "Nevertheless, we are also worried about the shortage of skilled workers, which our industry will need to meet the major challenges which lie ahead. Key factors here include the transformation of the automotive industry, the energy transition and digitalisation. You need the right people to get these done," says Schäfer in conclusion.

The German machine tool industry ranks among the five largest specialist groupings in the mechanical engineering sector. It provides production technology for metalworking applications in all branches of industry, and makes a crucial contribution towards innovation and enhanced productivity in the industrial sector as a whole. Due to its absolutely key role for industrial production, its development is an important indicator for the economic dynamism of the industrial sector as such. In 2020, with an average of 70,000 employees (firms with more than 50 staff), the sector produced machines and services worth around 12.2 billion euros.